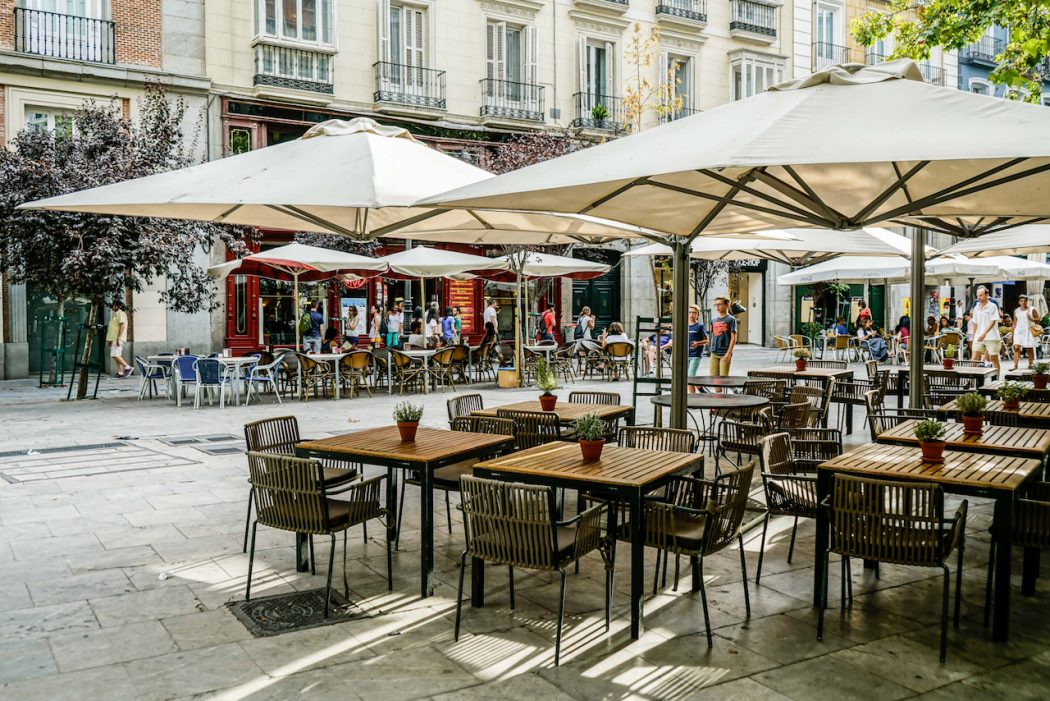 Rediscovering The Importance of Food & Drink Around The Table With Osborne

What I love most about traveling is experiencing the home and origin of certain foods and drinks. From the places they were perfected. You may be able to purchase imports from different countries, but it’s very rare to actually know what went into that product to make it what it is.

I became curious about Spain a few years ago, through the World Cup actually. After watching how spirited the people were, it made me wanted to learn about the country more.

From that point on, it I moved it to the front of my attention where it became almost something I tried to seek out and manifest. After watching a lot of media about Spain from the people, culture from prepared documentaries, I realized how big the importance of family, quality of life, food and drink culture was to the Spanish people. It was something that Canadians don’t put nearly as much weight on I find after comparing the two countries.

So, when I got the opportunity of going to Spain to learn more about Osborne, I jumped, high, at the chance.

I will start by saying that Osborne is quite the entity in Spain. It’s a company that surrounds and immerses itself within Spanish people’s daily lives. The whole trip, I was wondering what weren’t they involved with, more than what they were.

The trip’s itinerary would take us to different places, each with their own importance towards the make up of the food and drink ecosystem that is Osborne.

After landing in Madrid, there was a quick turnover between loading the luggage from the shuttle and heading off to our first culinary destination. This would be my first impression of the streets of Spain. So colourful, so clean in Madrid. Preserved with so much character. The dry warmth from the sun filled the streets up to the top of the building like a glass of wine as we approached our first restaurant. 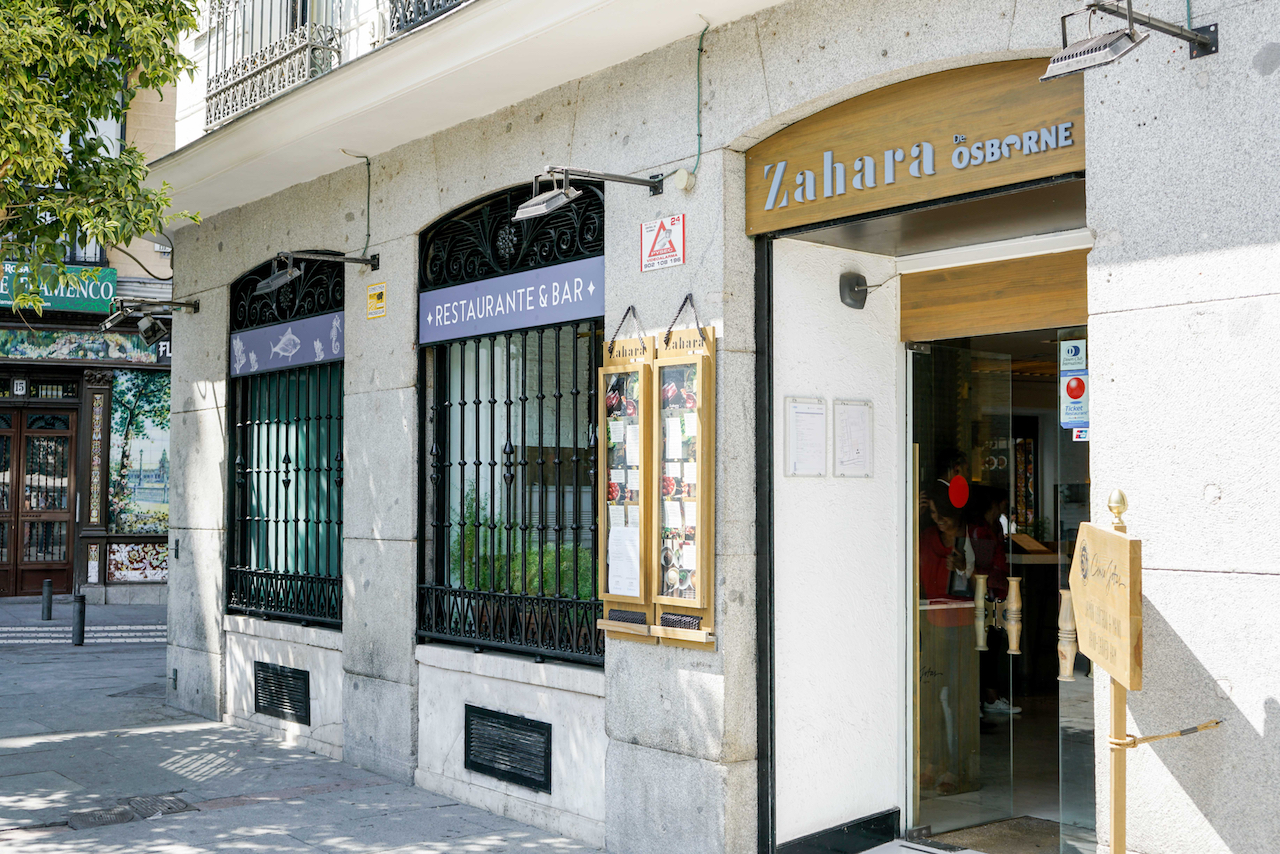 Tapas is common in Spain and so is enjoying a lot of courses. The same rule applied here as we enjoyed food and drink from Osborne’s restaurant, Zahara De Osborne. In amongst waiting for small plates to be distributed, the server poured a glass of Osborne’s Vermouth from Jerez on to the tray of glasses. The appearance of lemon complimented the Vermouth as a beverage that I would describe as a ‘heavy iced tea’. We enjoyed that as other white and red wines washed away the tiredness that I felt from the commute and made me completely forget about my long, international flight overseas. 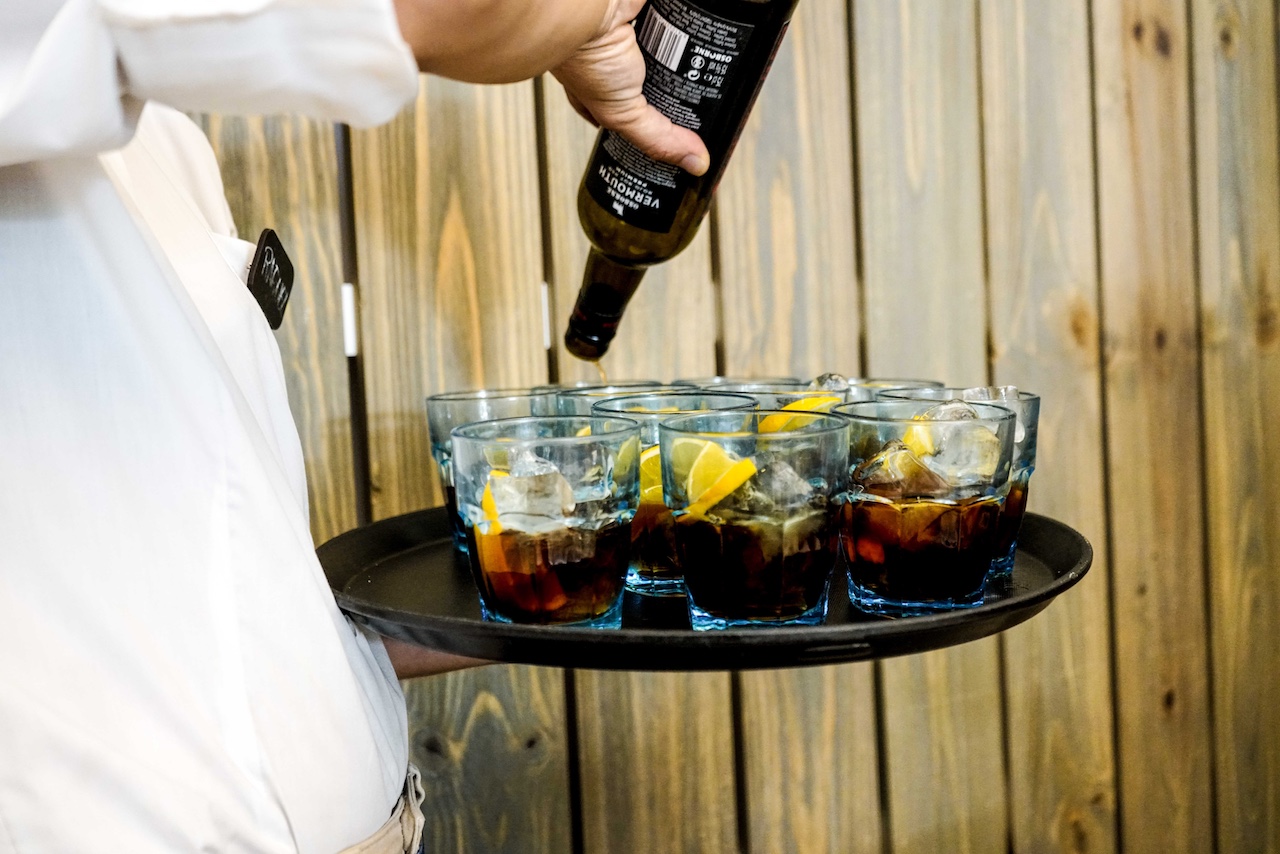 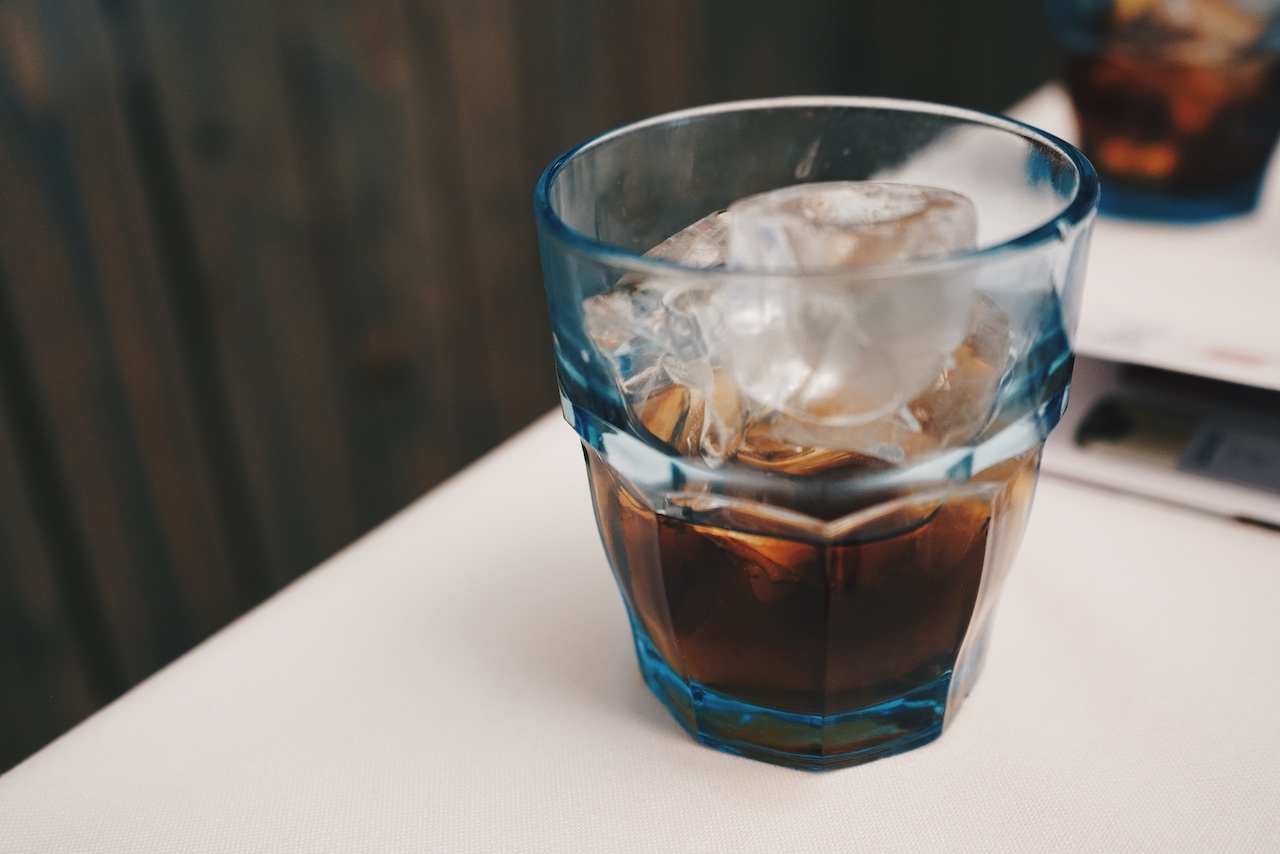 From there, it was time to explored the city and walk off the delicious foods and wines pictured below. 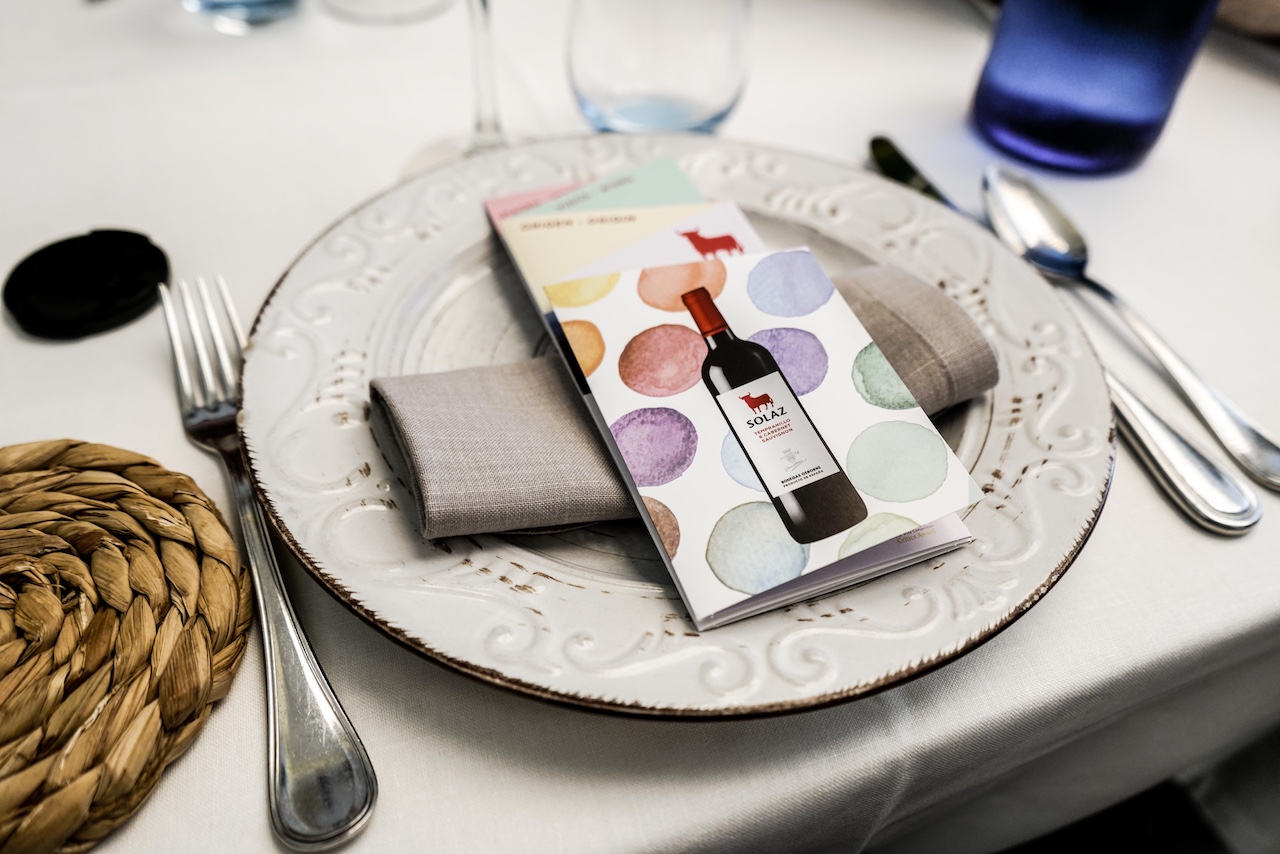 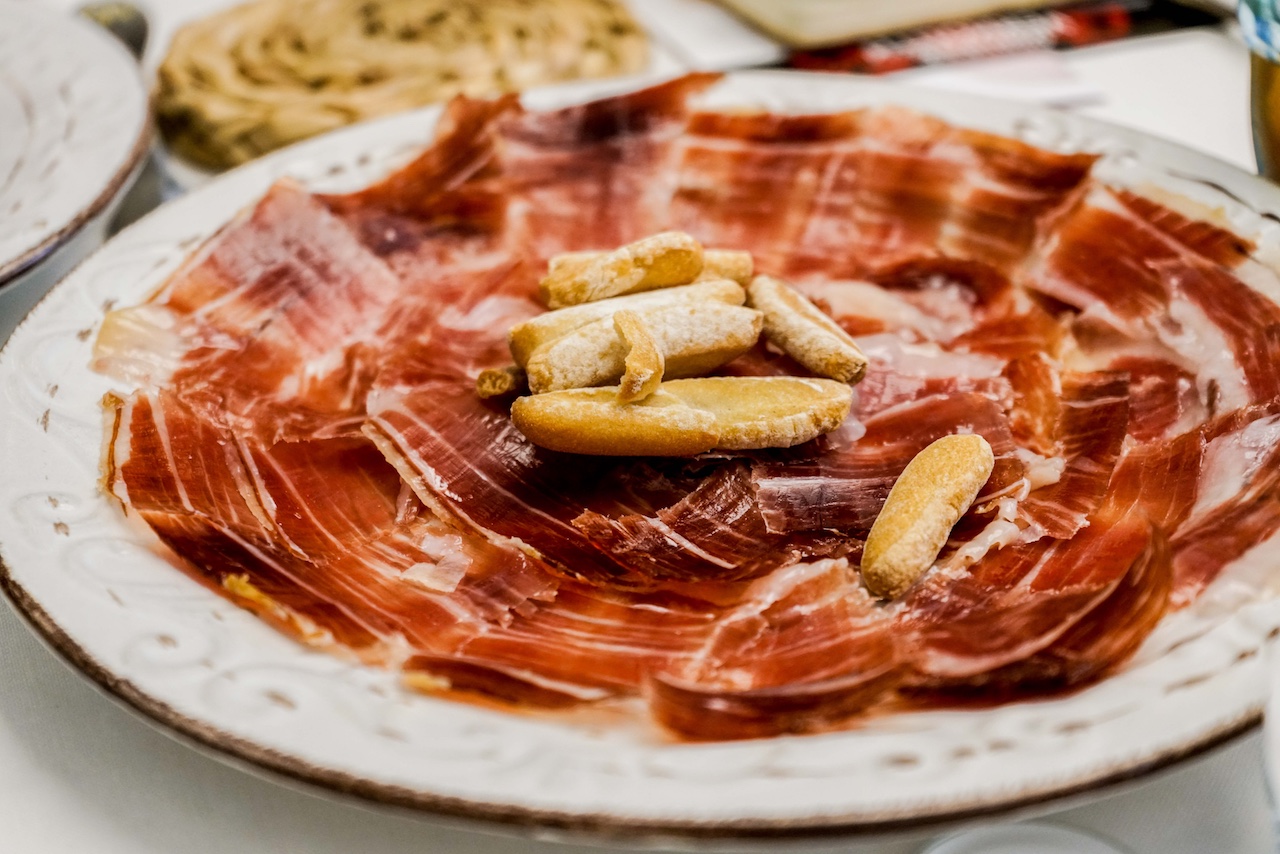 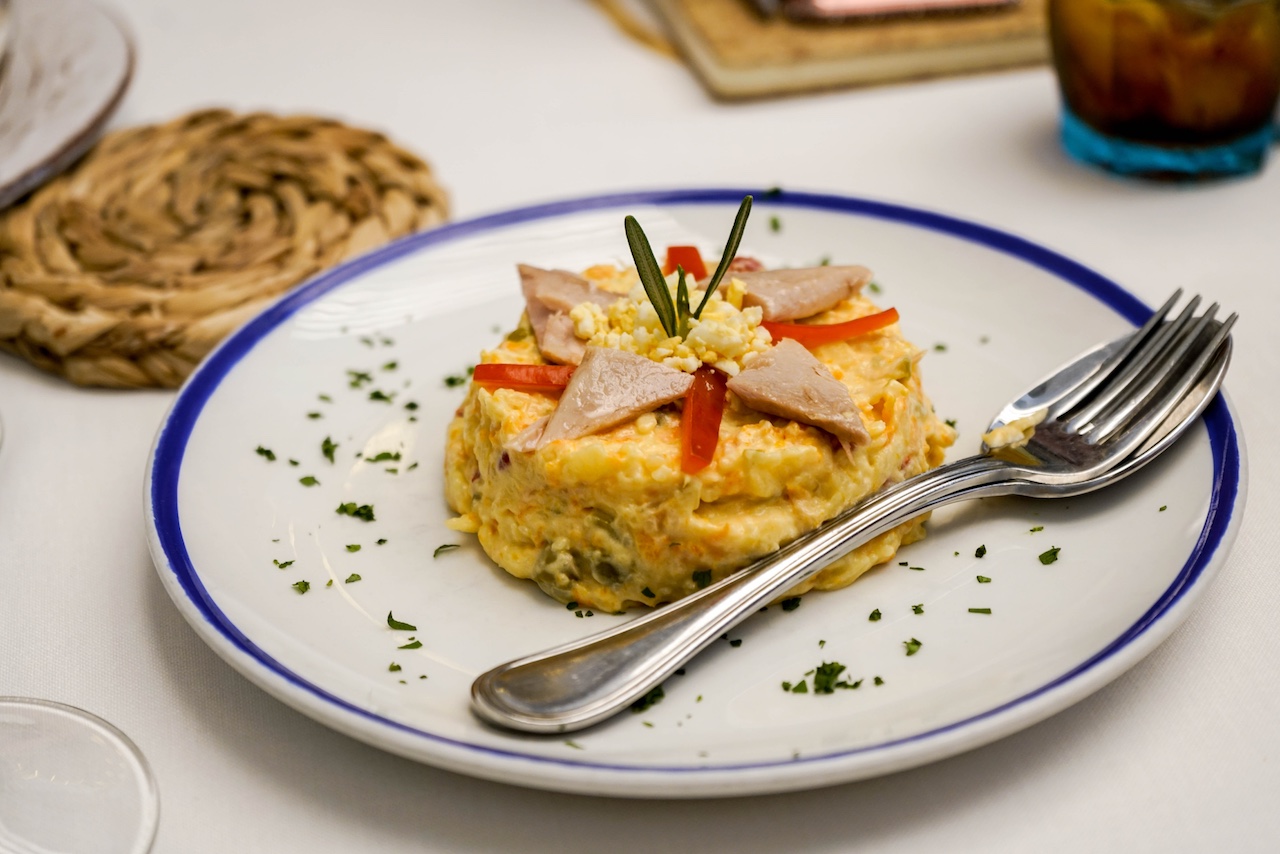 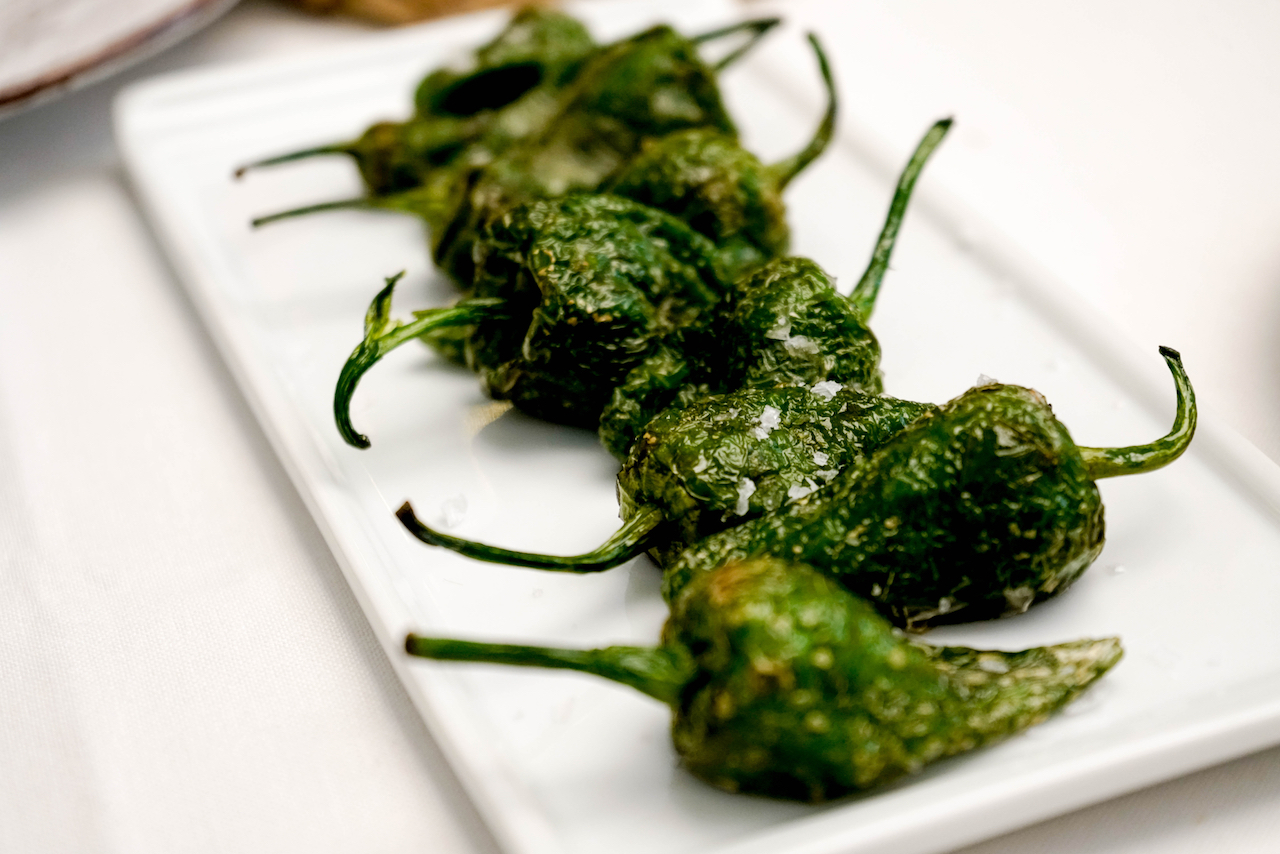 The 2017 Solaz Verdejo was my favourite of this meal passed the unique taste of the vermouth. It was that crispness I needed to kick-off lunch and refresh after the long flight. 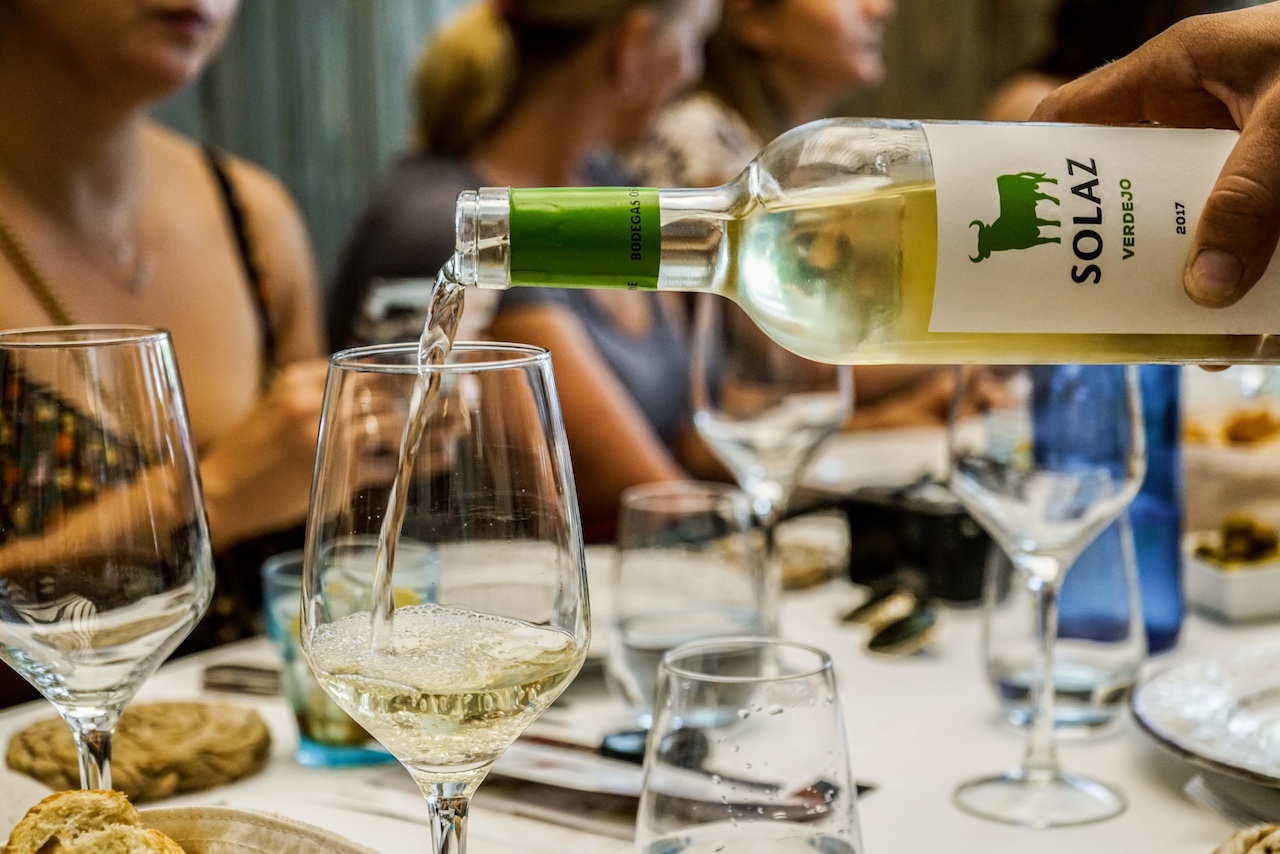 We then spent a few hours walking the streets of Madrid from the classic European, tight city streets to the massive parks. 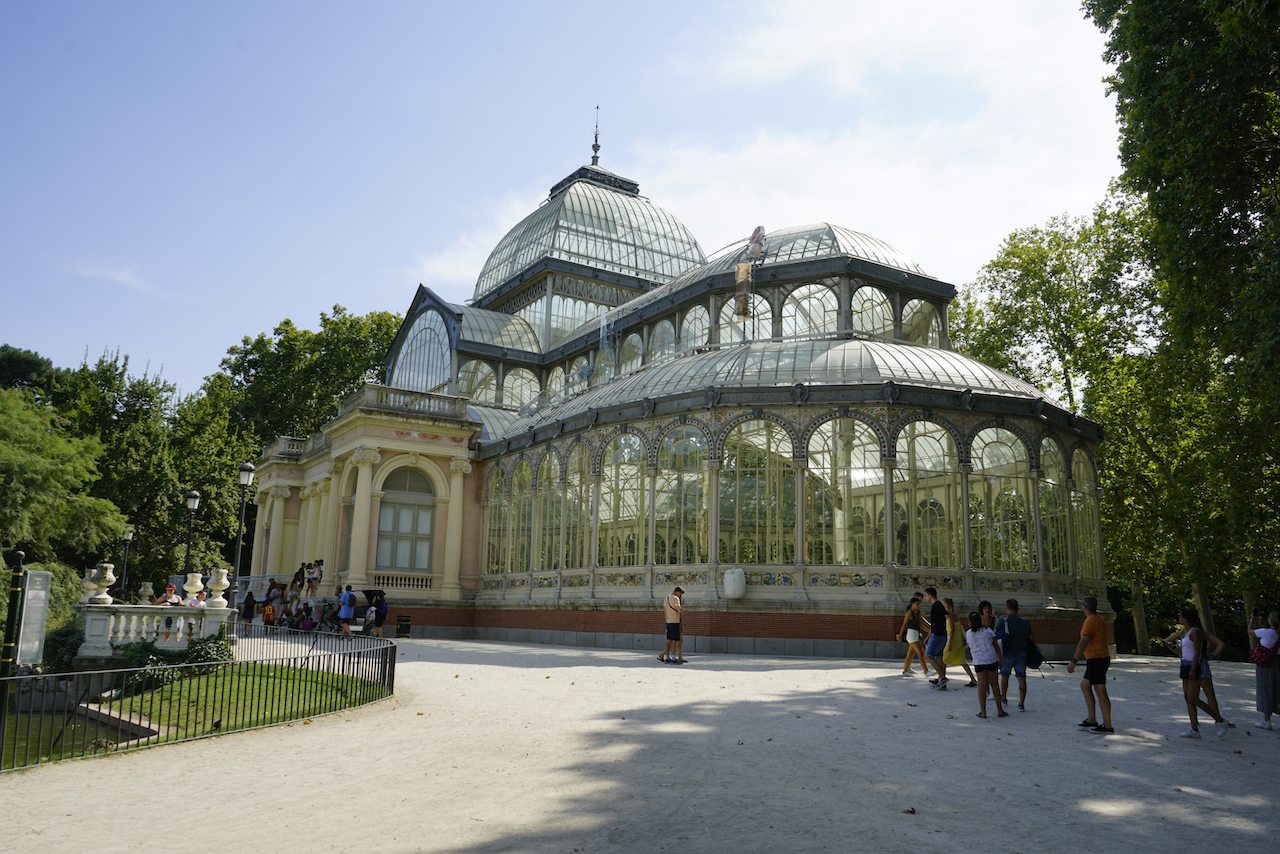 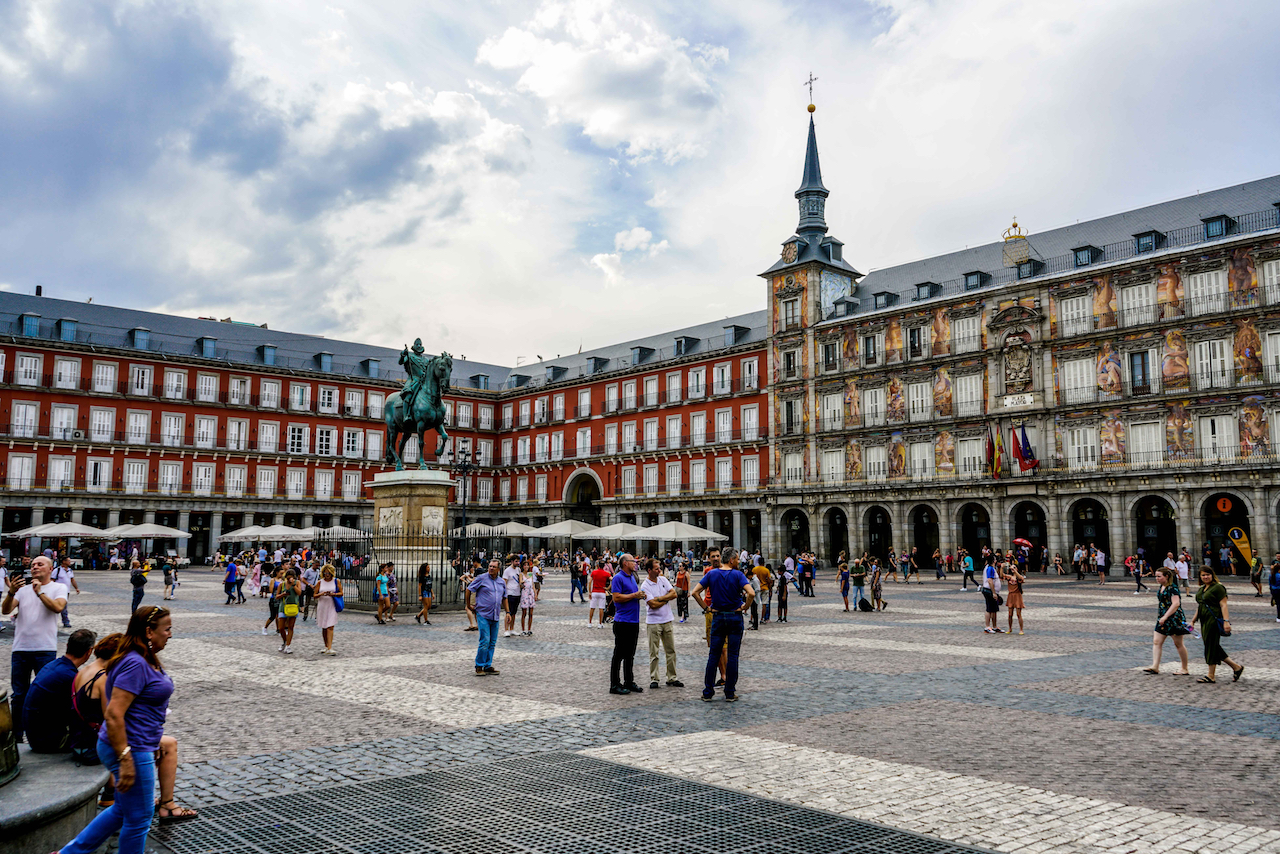 After I tried to clock up some kilometres under the soles of my feet to keep my legs moving, it was on to the next one. A continuation of how I was eating and drinking my way through Spain.

The dinner at Cinco Jotas Jorge Juan next was one on the top floor of a restaurant snuck into the Madrid streets. Upon getting there and seeing the different bottles lined up at the bar. I asked one of our hosts about the range in products, and she said it was all Osborne. I couldn’t believe it. The range was everything from a smooth gin to a more complicated and aged brandy, with wines under different names filling the middle of the two ranges.

This meal, in it’s entirety, was when I first realized that life around beverages was of major importance to Osborne. Equally as important to the accompaniment of the beverage to a good meal in Spain.

We enjoyed a beverage while we were waiting for everyone to sit down at the table. There, in the center of the room, like the carving of a turkey at the head of the table during thanksgiving was one of the Jorge Juan staff making beautiful plates of acorn-fed 100% ibérico ham, carving it with such precision, attention and care. 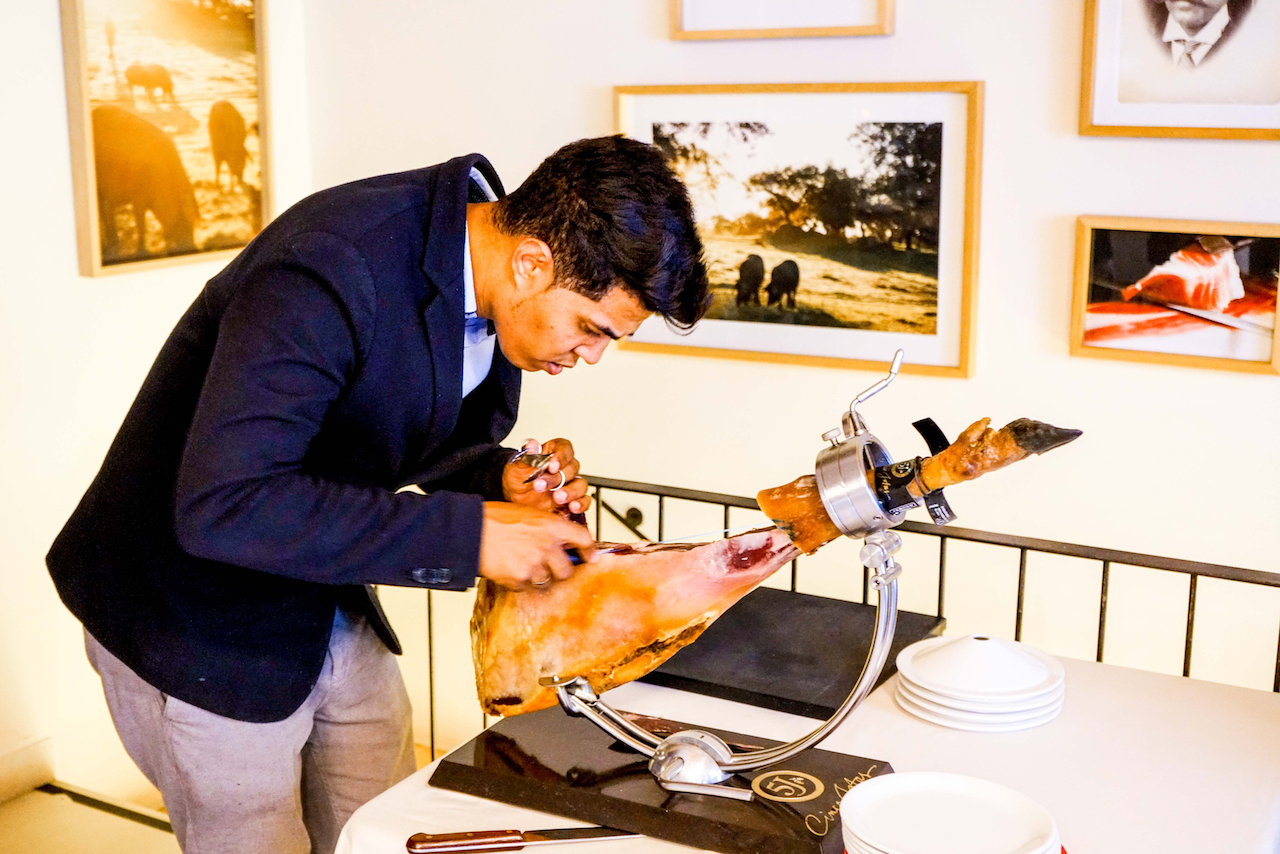 We all enjoyed a beautiful meal. 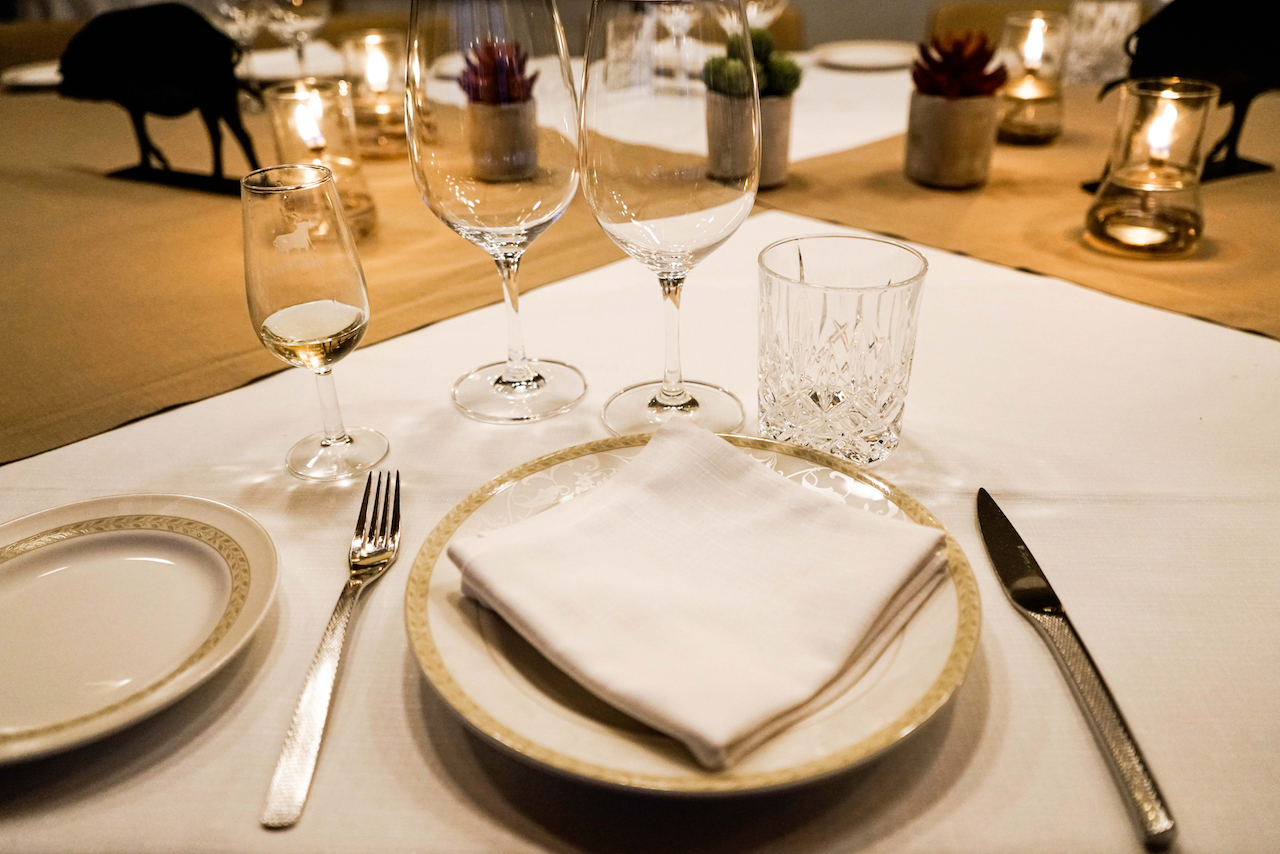 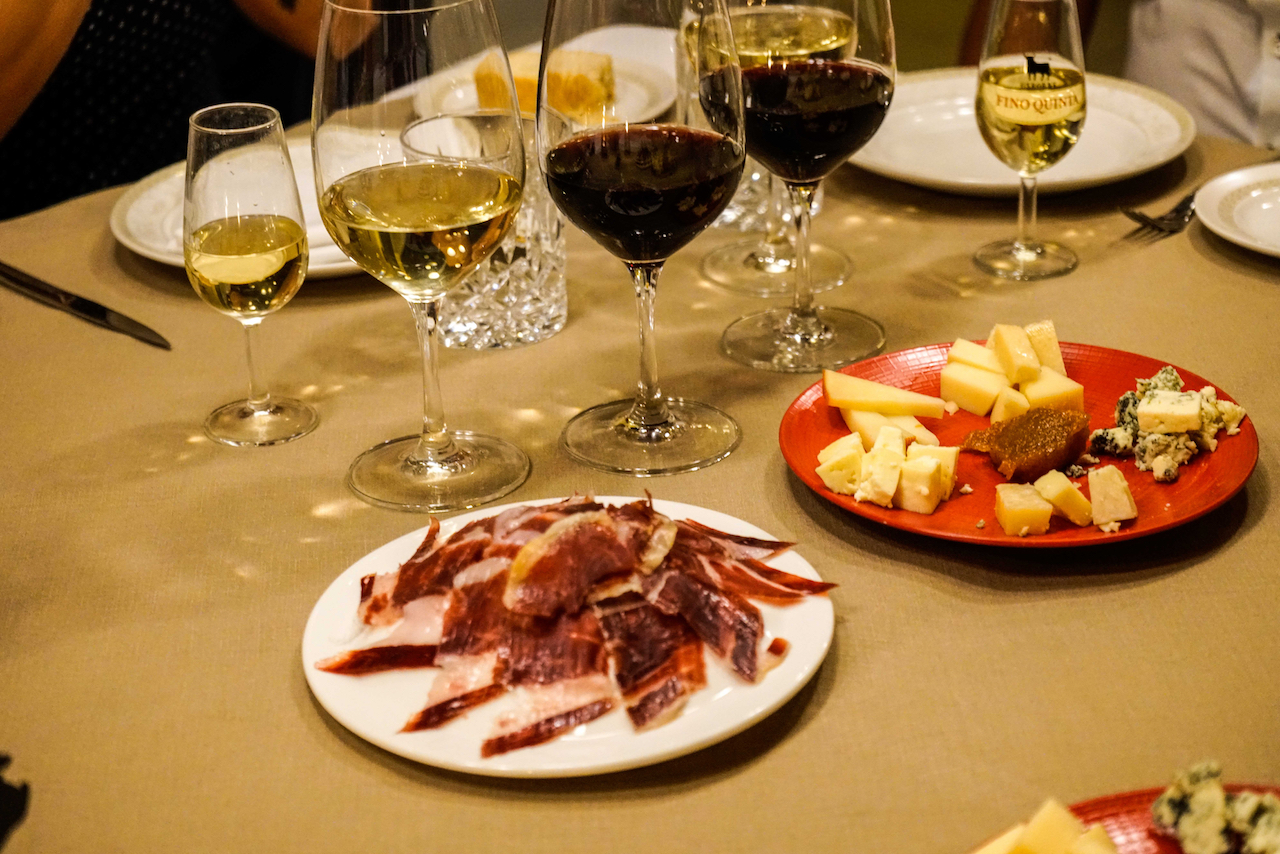 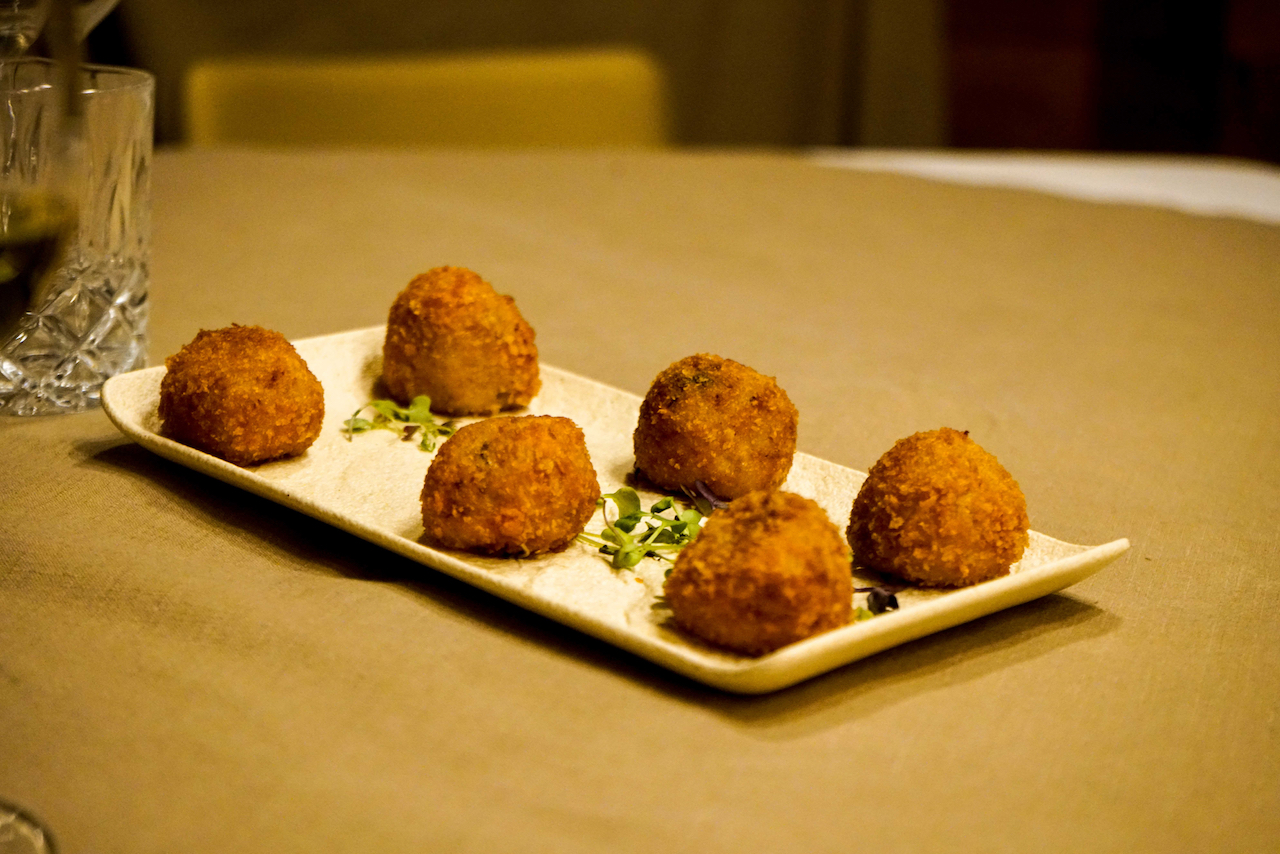 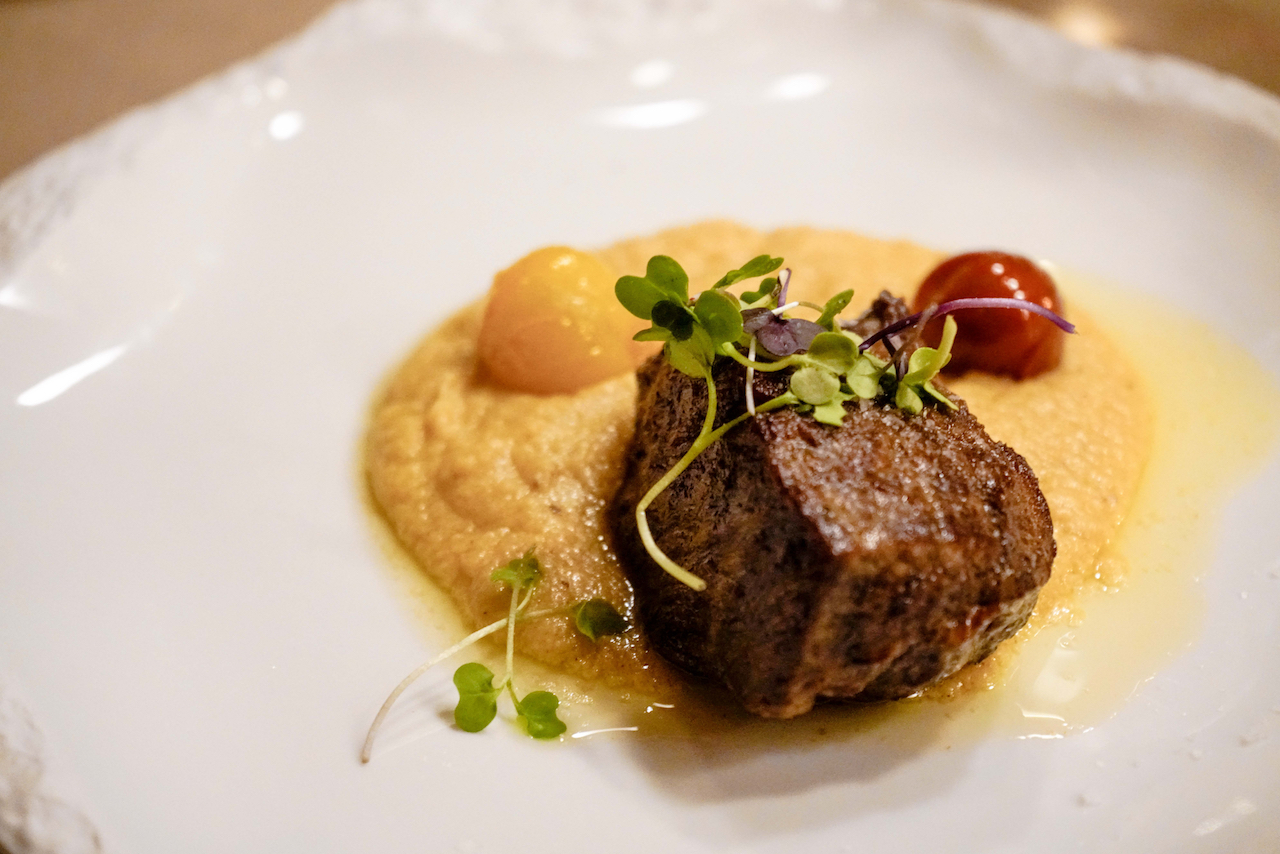 The dinner continued and provided a range of dishes to share with the people left and right, offering to serve you, and you, them. I found that the tapas mentality added more movement around the table. The exchange and transaction of food that you haven’t had yet, compared to half-filled plates of food you just helped yourself too. The transacting and passing of food, gave a bigger sense of community and connection between everyone at the dinner table.

The night rounded out with a beautiful array of conversation as we found ourselves well-fed, well-nourished and cusping on the feeling of a food coma as we tried to walk off some of the delicious meal back to our hotel for the night. 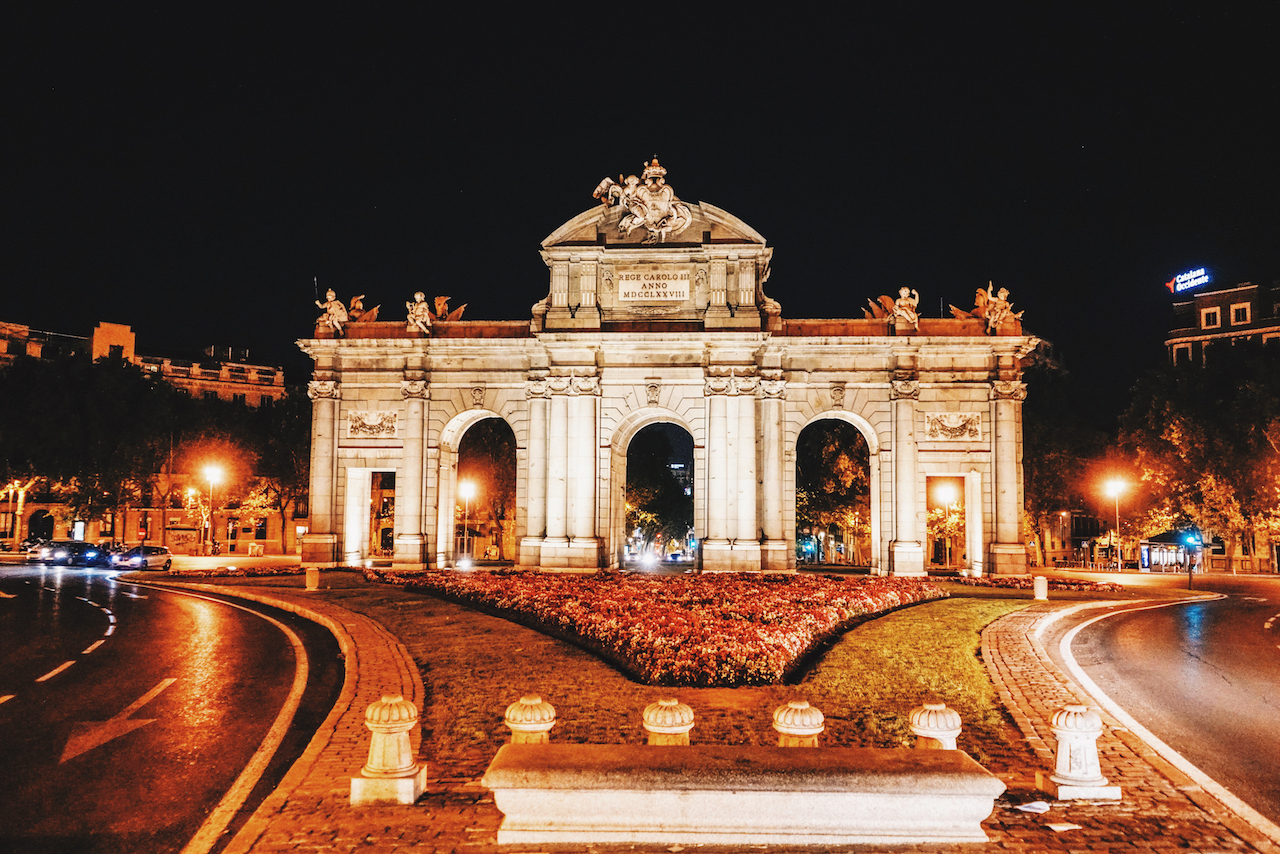 With my first time being in Madrid, I immediately saw a pattern in how they live their lives. Simply, it’s their importance of living with a few simple, but main ingredients. Designing life with colour and flavour in mind. You can see this their artistic heritage, architecture, palette for a large variety of foods, served tapas-style, and their variety of drinks to choose from that they value and that originate from Spain. It feels like Osborne has tattooed these values onto their own company’s values and it’s been growing since it’s strong foundations created and curated by life around the table.

As the trip goes forward you will see more historical moments, interesting ways wines are created and the strong fundamentals that Osborne has with their dining, drinking and living experiences to bring Spain closer to the dinner table.

Stay tuned for more from LXRY and thank you for reading.