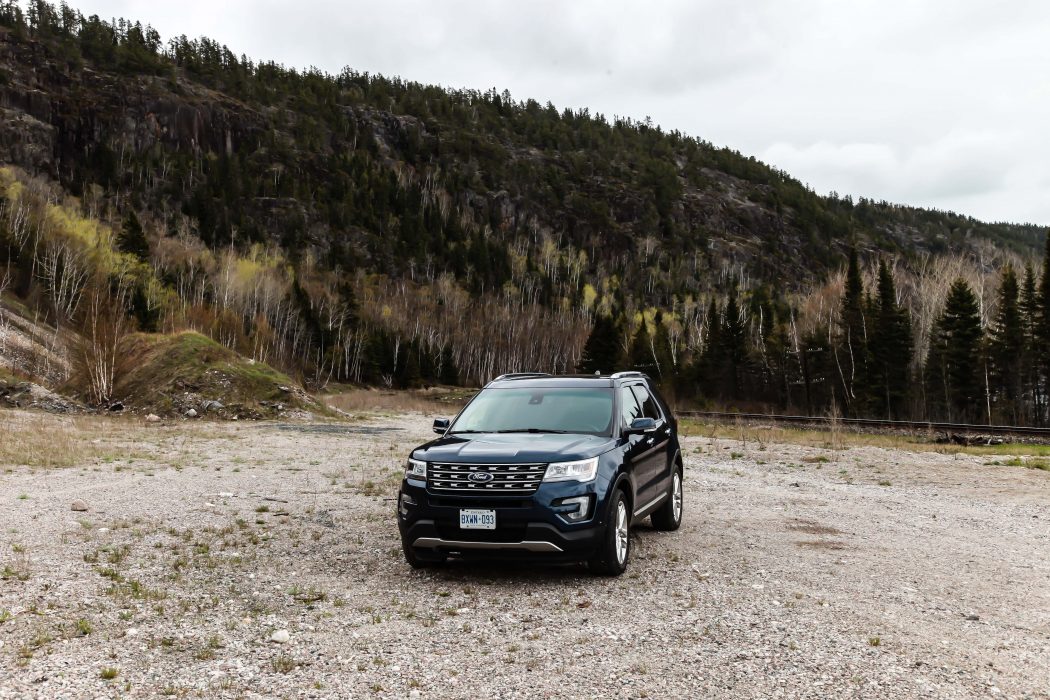 On the last episode…We traveled from Toronto to Thunder Bay in a brand new, fully-loaded 2017 Ford Explorer SUV and explored some of Northern Ontario, further than some people in the city have even thought about going.

This instalment finishes off that 3,200 KM road trip on some of the most scenic roads in Canada. We are excited to show you.

Don’t scroll down too fast, we want to set it up first.

To recap the trip, we went from Toronto to Sudbury, Timmins, Moonbeam and over to Thunder Bay.

Thunder Bay is one of those cities in Norther Ontario that has a charm to it. It’s developed. It has a wonderful waterfront area, great restaurants, a large Finnish population, a homage to a Canadian legend and natural beauty across the water that seems like it’s lurking in the distance like a Sleeping Giant. 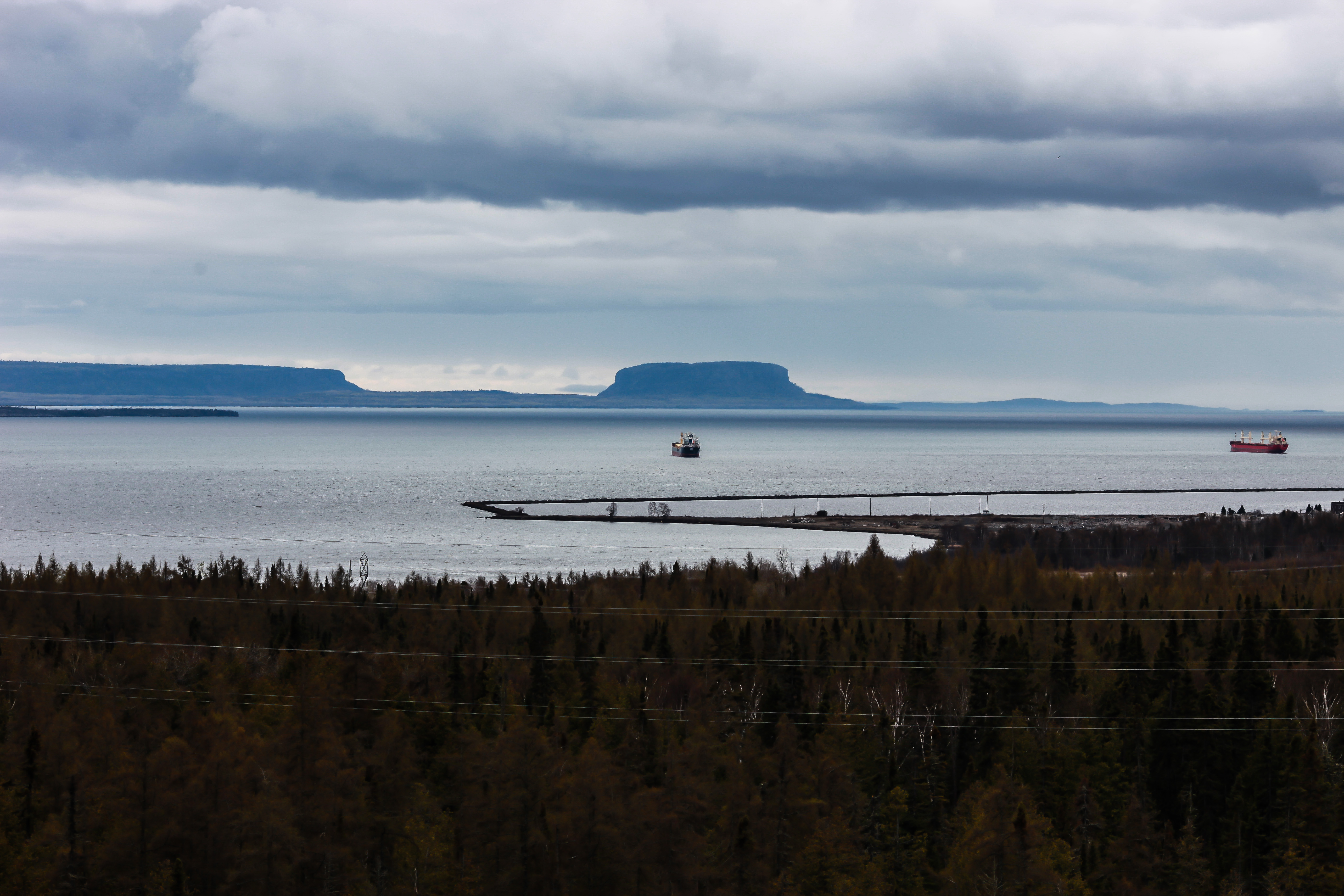 We had fun in Thunder Bay, staying at the Marriott Thunder Bay, which kept us pretty central to all the different areas around and exited to go to a symbol of one of the greatest Canadians that ever lived. We got in our 2017 Ford Explorer Limited Edition and headed over to said place. You had to climb an elevated road atop a plateaued parking lot with a pathway leading to this preserved figure ahead. We exited our car and walked up to the Terry Fox Memorial. This was the long distance legend that ran for 143 days and covered more than 5,373 km on foot. Thunder Bay was his final stop. Someone who inspired millions every year and his legacy lives on, raising money for charity all across Canada. Remarkable. Considering Terry Fox made our road trip distance look like a checkpoint on his trip, we were extremely impressed. 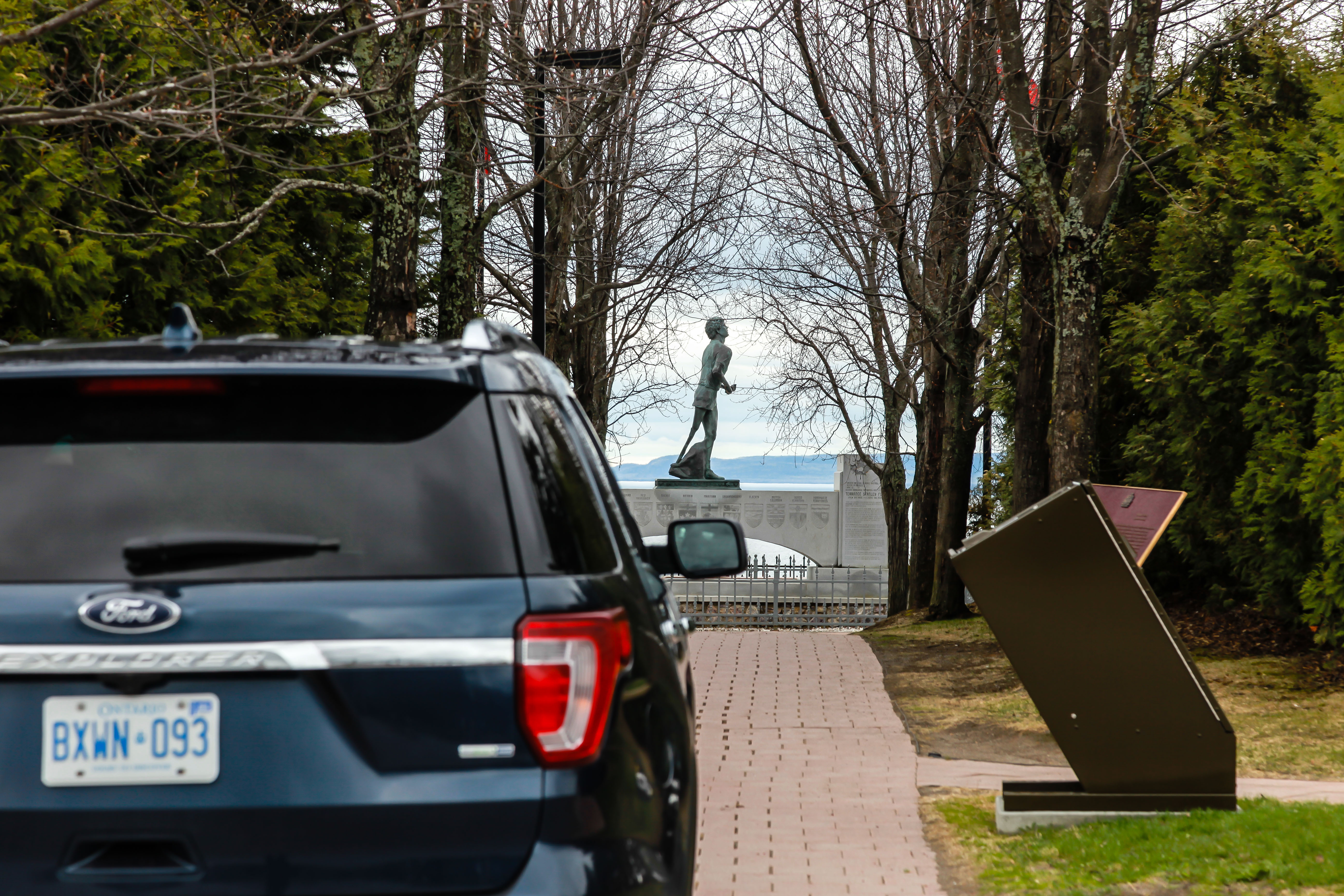 After giving our peace to Terry, we headed on to White River and Wawa for the night. After driving to pick up gas we noticed something unusually familiar behind us. My running man, James, immediately called one of his relatives to tell them what we had seen. It was a giant Winnie The Pooh statue commemorating the inspiration that author A.A. Milne had when he saw a little black bear cub that was brought to White River. It was actually said that some people in White River around 100 years ago used to have bears as pets, posing with them in family photos. How about that! 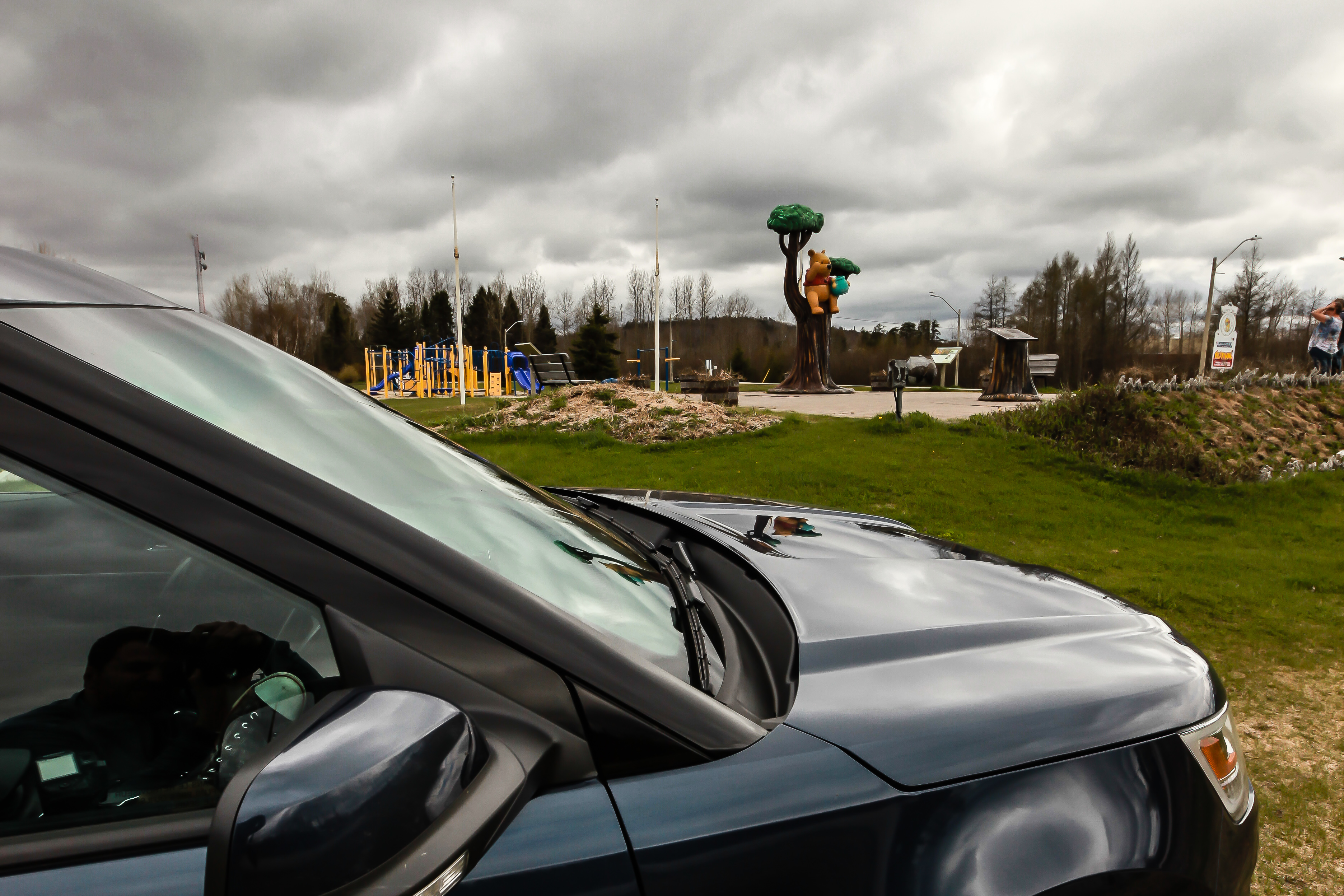 We stopped off in Wawa for the night, planned our drive for the next day, which proved to be one of the best drives in Ontario.

If we could pause here for a moment, one of the things we really liked about the 2017 Ford Explorer Limited Edition SUV that came in handy over and over again was the 110V power outlet. If you are a photographer if you are going camping or anything like that, you know how important it is to have a plug with you. It makes your life much, much easier. We were charging equipment with us while we were driving and didn’t have to stop at a coffee shop for hours looking for a single plug underneath the chair of a local family. Saved us from some awkward moments. The 2.3 Ecoboost engine and the Intelligent 4WD system was a great team, whether it was coming back onto the highway from a loose gravel entranced side road or getting up to speed to pass one of the many 18-wheelers we saw, both situations were taken with ease. Kept us away from the gas pumps as well. 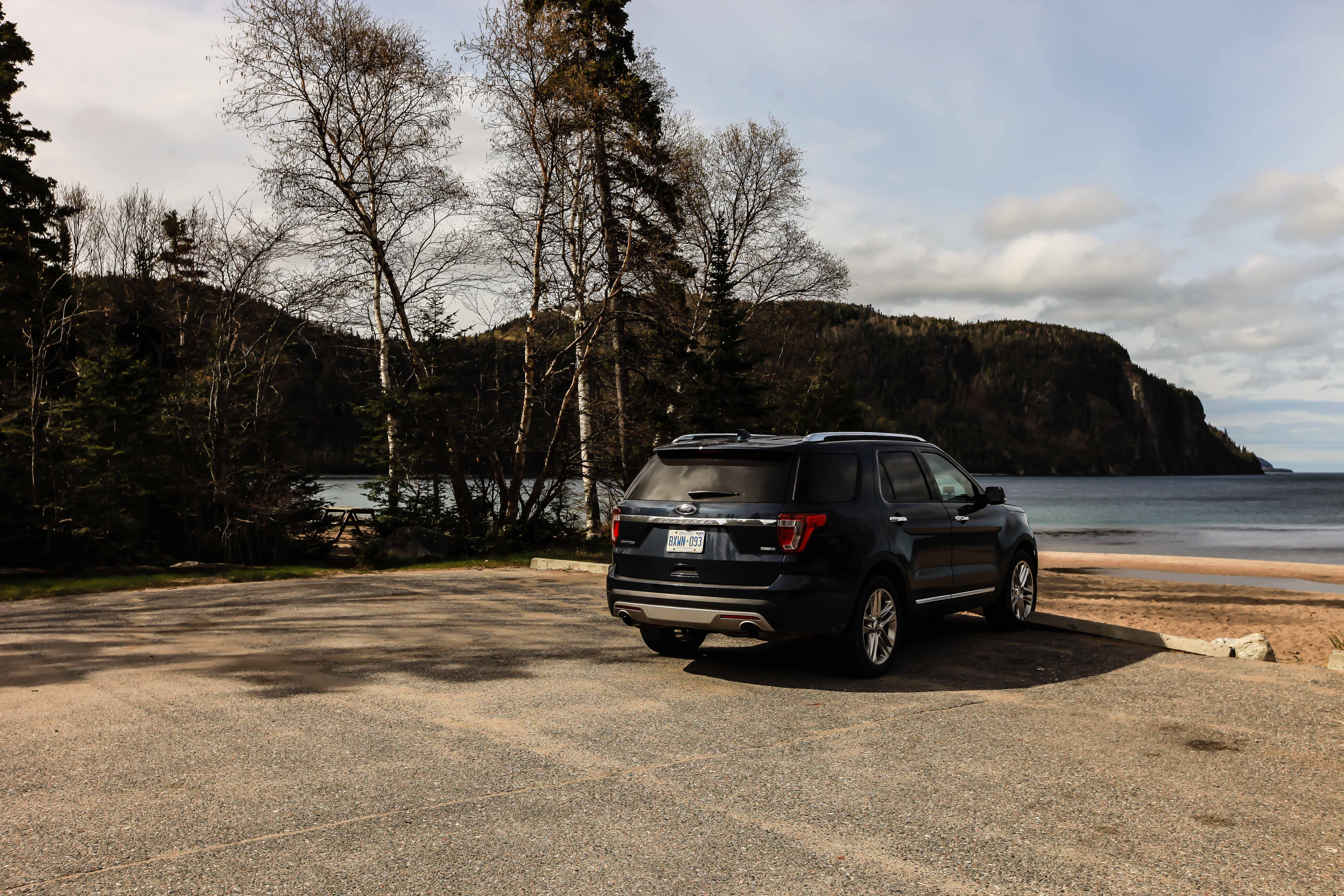 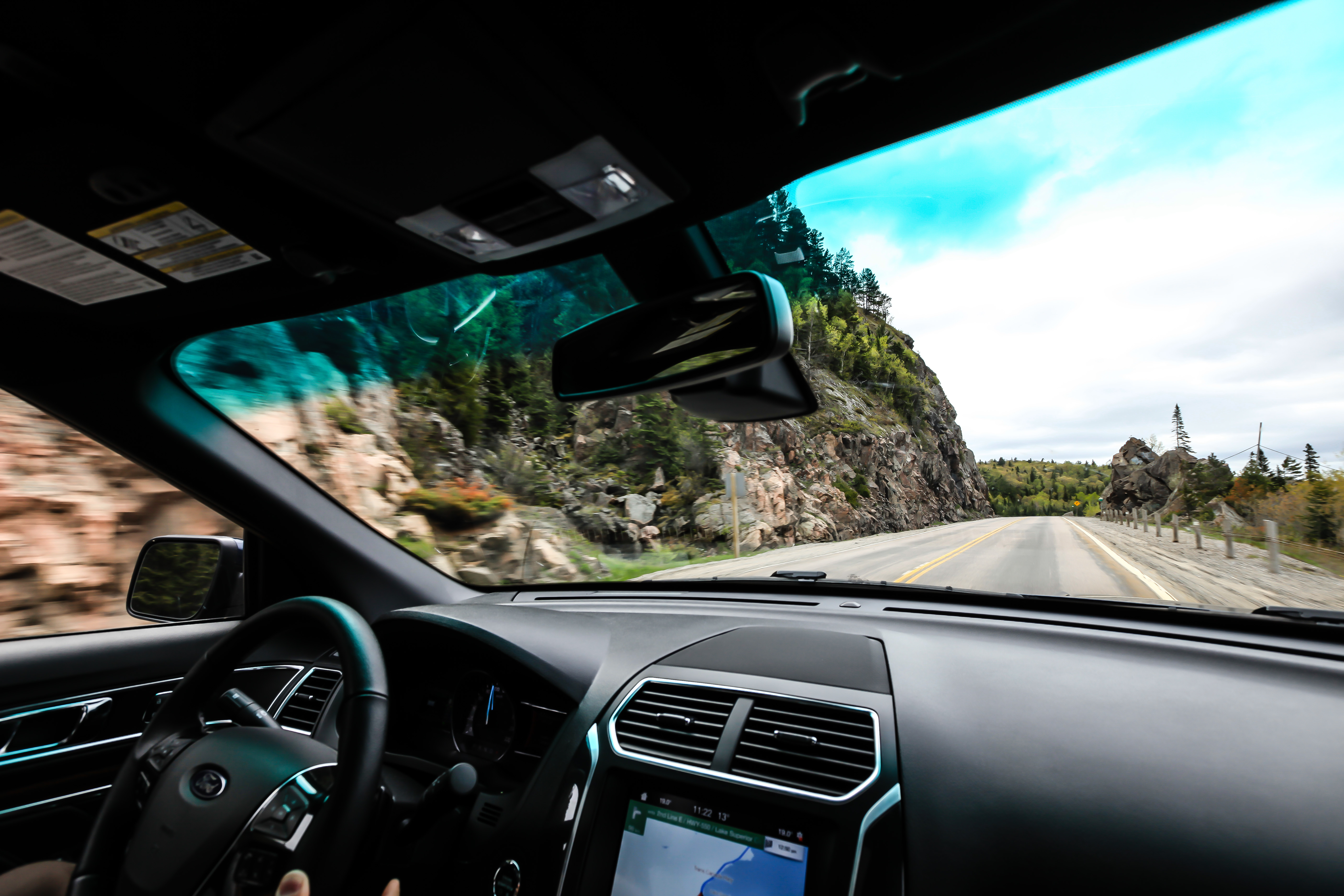 When exiting Wawa, the road trip back started off with quite the high energy kick. We drove along this path to the scenic High Falls and were very surprised by what we saw. The sheer power of thousands and thousands of litres of water were pouring down and slamming the water below over and over again. This caused all this mist to spray not only the car but covering us. We were wowed. 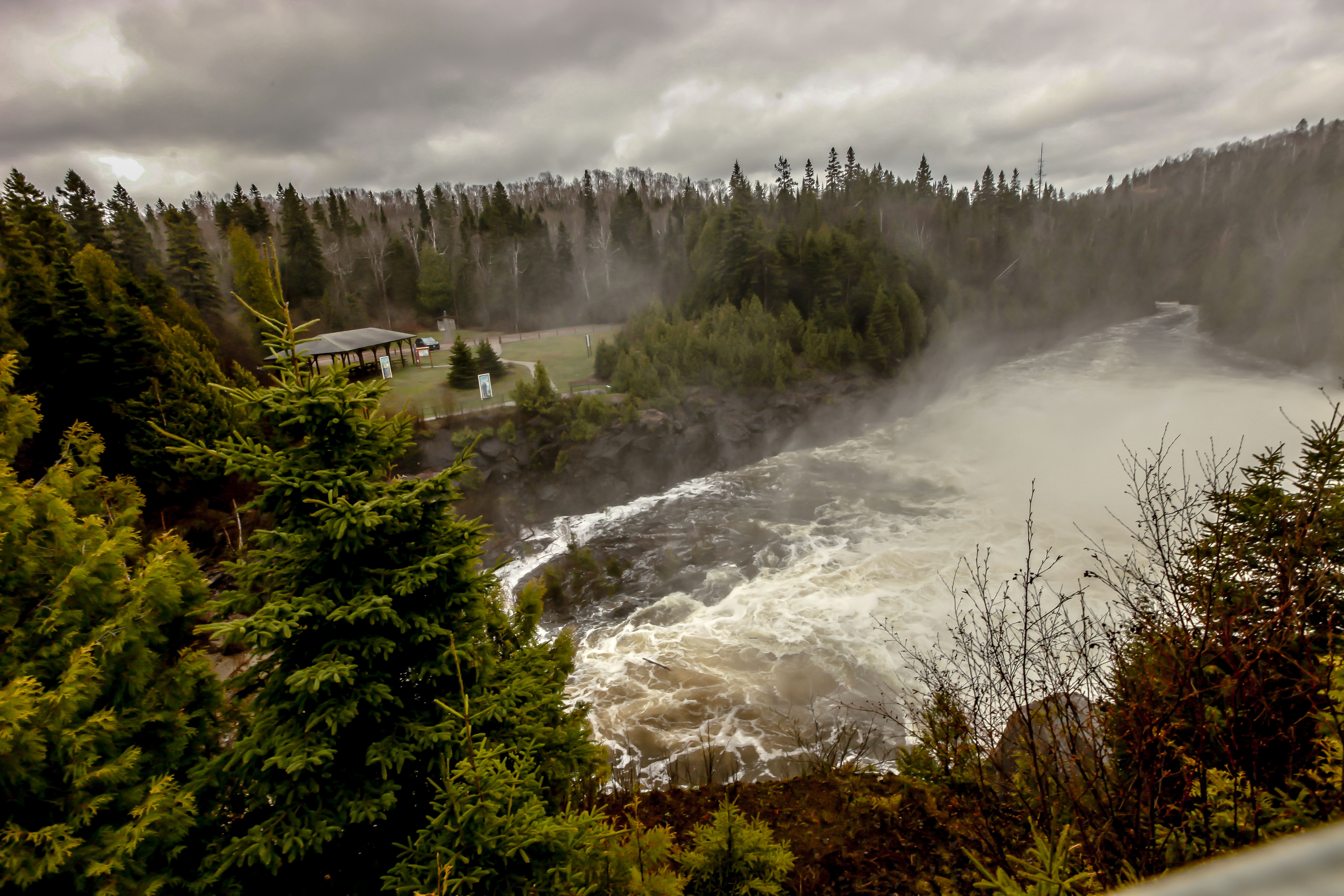 We took to the road again and it just kept getting better. The drive through Lake Superior was beautiful.

The winding roads, the sneak peeks of water, rocks and trees and the elevation differences made this quite the road trip. 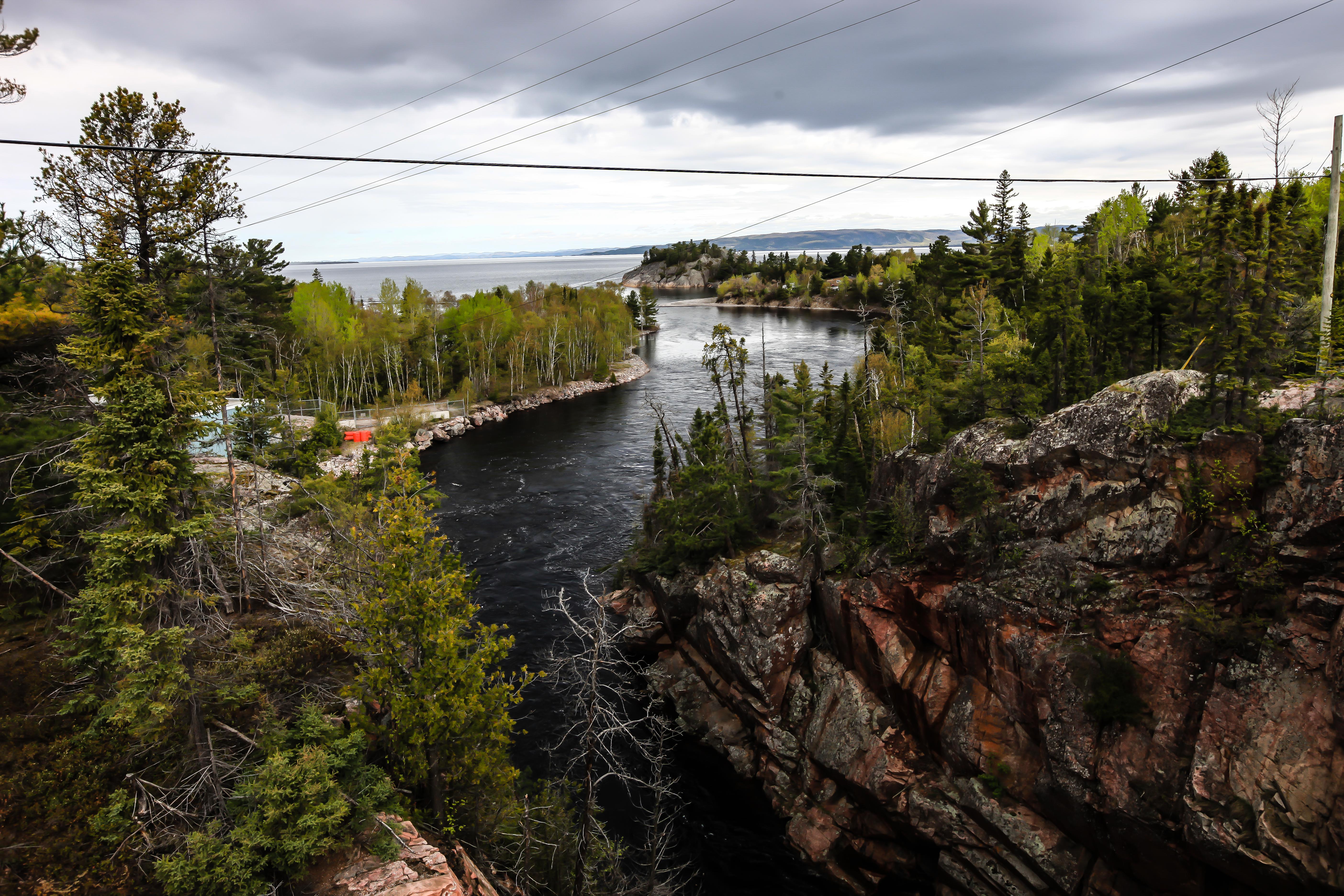 The drive lasted for over 100km and stopped just shy of Sault Ste. Marie. We stayed there for the night after taken in one of the most scenic drives of our lives.

We pick things up in Sault Ste. Marie where the drive continued to be laced with beautiful tall rock faces, look out points and more on our way back to Sudbury and then back to Toronto to drop off the car. 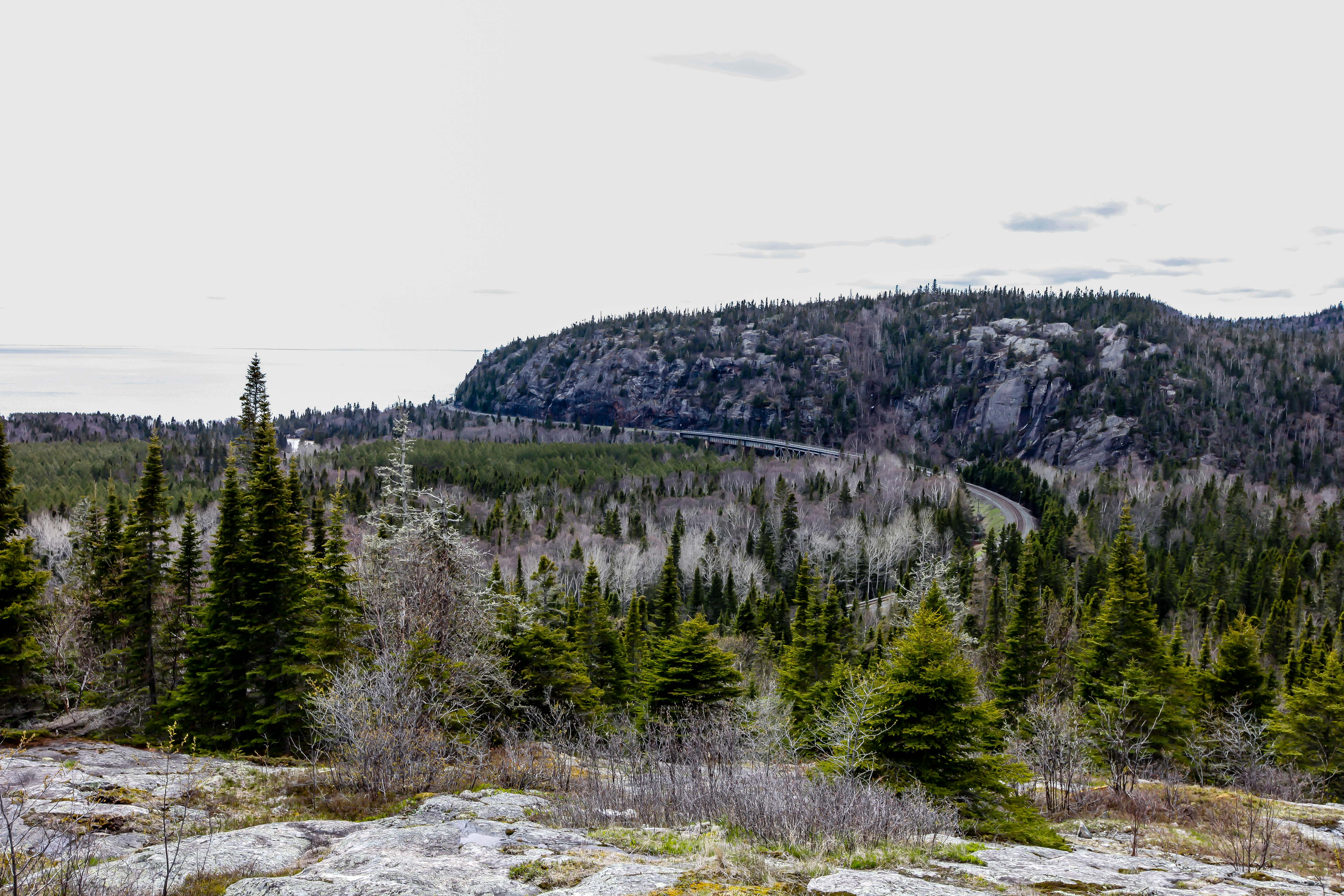 With Canada’s 150th birthday just passing it made us reflect on the sheer beauty we have in Canada. The rolling hills, mountains, beautiful flowing rivers, tall, deep green trees and the lovely people that created these communities and built these roads. We were driving along the history of Ontario. We also saw a lot of Ford Trucks and SUVs in these areas. Working men and women relying on their cars for work, pay, commute and travel. Ford has been around for over 100 years and a lot of people do this kind of travel on a weekly basis, so we salute the hard working people of Northern Ontario, may the scenic drives always excite you. 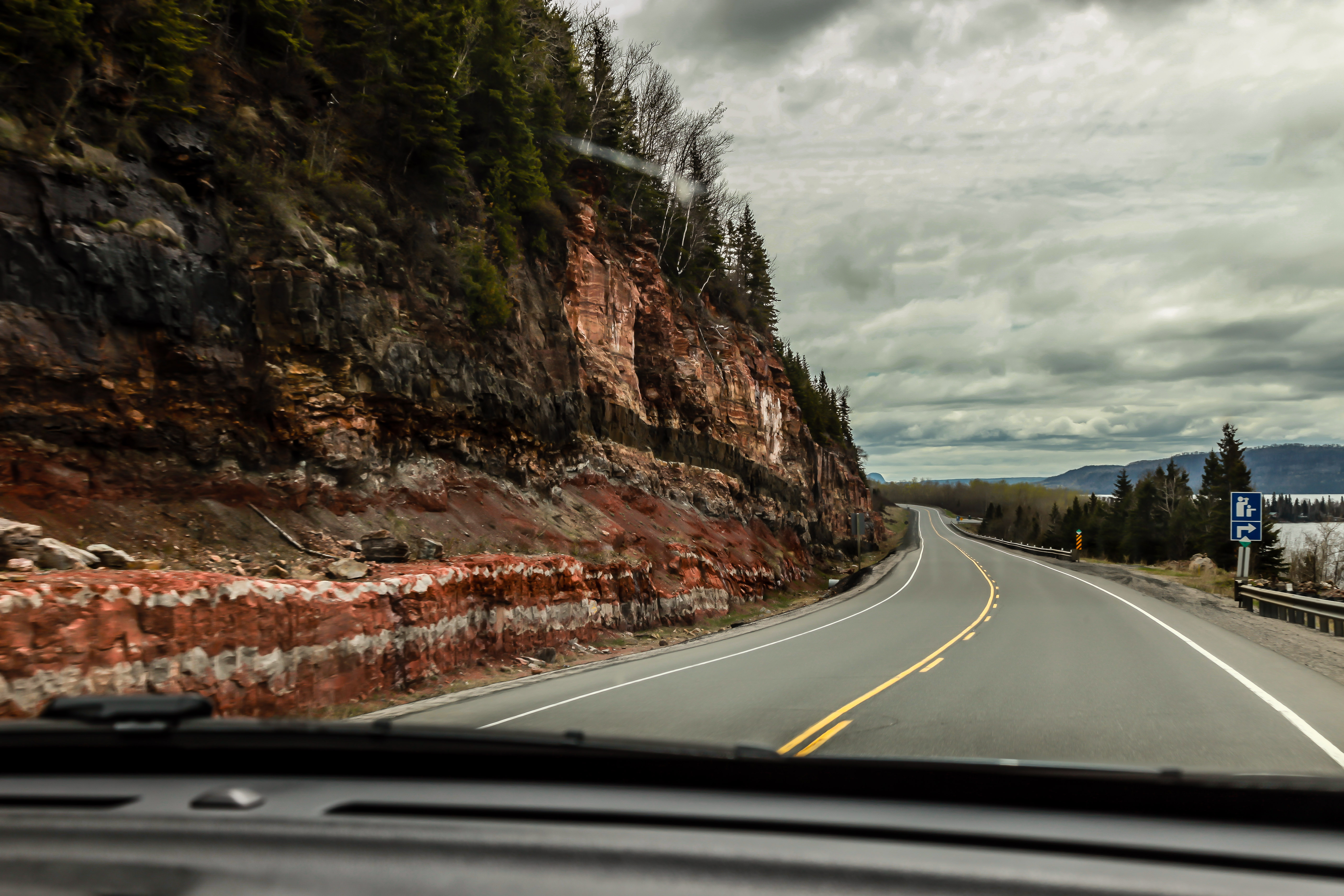 Our trip was something for the ages. We have never done a trip this long. We have never been to these places before. We Go Further to learn more about ourselves and expand our horizons and maps of the world. We go further to develop an understanding of how different people live and what’s most important. We wish that more people in the cities went out to the countryside and even Northern Ontario to learn more about what’s important and close to you without so many distractions in life.