Before we get into car, much like the experience driving a Rolls Royce a month ago, I am going to start by painting you a picture of my 24-hour trip in Dallas…

It’s still dark, the only light around is artificial from early risers, neighbours burning the midnight oil and the dreaded and motivated bike packs with their shaping one piece suits. On my way to the airport, not knowing what to expect next.

The commuting seems normal, seems like I was in line for a vacation. Bags, and suit bag weighing me down in a very normal way,  but there is something that feels different about this day.

Editor’s note: When I was growing up in a small town in Ontario, although a very nice and safe place to live, lacked excitement. Anytime you saw a sports car, it was a big deal. But, then that’s what motivated me to obtain, learn about and obsess over the outliers that zoomed by with a growl, unnatural and exciting compared to the community around it.

But, those are all small potatoes compared to what I was about to experience, a Rolls Royce.

Through stories, branding, marketing, and seeing how these amazing machines were made, with unheard of meticulousness with details and design, these cars were the blue moon of many people.

People don’t just look at Rolls Royce as it pass by in a blank stare, they look, notice and are floored by them. They don’t come around often in Canadian cities, and if you see one, it’s an amazing moment in time.

The idea of being involved in anything Rolls Royce is a childhood dream of mine, seeing them royally at auto shows, looking at posters and magazines, and generally building a sense of ‘what if’s about Rolls Royce. What if I was able to drive one, be chauffeured in one, what would be like to just sit in one and feel what the most powerful people in the world feel like?

The tires screech from the plane as they hit the payment, taking me out of a dream like state of the comfortable white noise of the plane’s cabin. The daydream is over as the reality sets in. The reality, that in a few minutes, I will be a passenger and driver of the new 2015 Rolls Royce Ghost Series II.

As I exit the doors and hit with a wave of Texas heat, a red one parked out front and immediately, I am given a Samsung Galaxy Tab, welcomed by black suited driver as he opens the beautifully crafted suicide doors for me. As soon as I sit down there is a welcoming comfort from the rear seats and a general ‘boss like’ feeling. 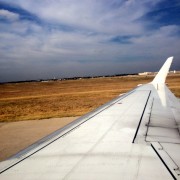 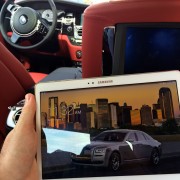 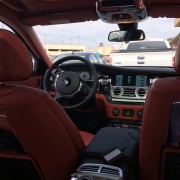 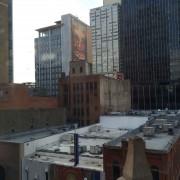 We are taken to the Joule Hotel in Dallas where around roundtables, me and surrounding auto-journalists are seated with one of the representatives from Rolls Royce. We chatted over a delicious brunch, talking about the past, present and future of Rolls Royce.

We are given a presentation about the extreme lengths Rolls Royce have gone for their customers and customer’s imaginations, when it comes to customization of their beautiful cars.

Rolls Royce was saying that they wanted to target the Ghost Series II toward entrepreneurs. The representative that was sitting with us, said what a joy it was with working with entrepreneurs because they all felt that investing into a Rolls Royce was a reflection of how far they have come and the success that they have made for themselves. It was a fully customized treat to themselves for working hard all of those years previous.

Editor’s note: Perhaps I might experience the same feeling one day in my (future) black and white one with orange accents.

We pair up. First, I was the passenger to a great auto-journalist from New York City. He had driven the Phantom and other beautiful cars, but he seems fond of this one while he was driving it. His first impressions were the fact that he loved the placement of the heads up display, seating was comfortable, and certainly the cameras at the front and back of the Ghost Series II, provided some great visibility when pulling out of the busy afternoon streets of Dallas. 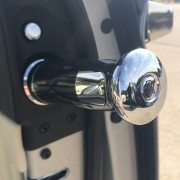 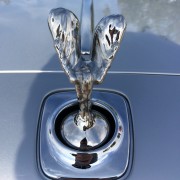 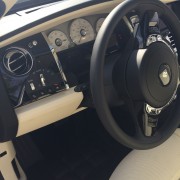 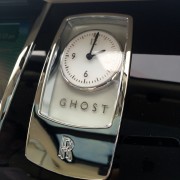 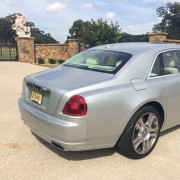 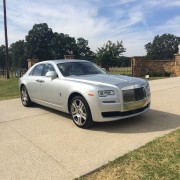 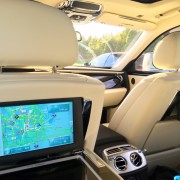 We drove for about an hour, stopping in front of beautiful huge ranches, and taking pictures (above) that seemed fitting to the massive real estate surrounding the car. After that, we turned into a large recreational park where we stopped, took additional pictures and then switched spots.

A lot of people are intimidated by ‘big’ cars like this. I asked some friends before going of what they think it would be like, and they were all very terrified of the thought of driving a car of that size. But, as soon as I got behind the wheel of this car, those questions were answered.

The steering was fluid. It felt like it glided across the road. Every aspect of the car didn’t feel ‘big’ necessarily, but it felt fitting for the amount of confidence it had on the road.

The sound system was astonishing. We listened to some upbeat big band music, thinking with that many different sounding instruments on stage, it couldn’t possible handle the amount of variety. Oh, but it did. The sound was so detailed, if you wanted to you could hear the sounds of the fingers of the guitarist sliding up the neck of the guitar. It felt like I was in Massey Hall right then and there.

The curves, the power, the agility. Not a problem for the nimble, yet very powerful Ghost Series II.

As a passenger, I thought the narrow(-er) roads of Dallas would be trouble for the wider Rolls Royce. But with embedded technology, it was a breeze to drive, and quite fun! So, when you drift over the lane, the steering wheel will vibrate and let you know that you have diverted from staying in between the lines. You don’t have to worry about that, and it’s a great reminder.

Here is the thing, do you want to know what really makes it a Rolls Royce?

Yes, it is the masterfully built quality, it’s the prestige, and rarity of the car itself, it’s also the feeling that royalty, your idols, and only a few people have been into this car. But, I can tell you that the one thing makes this car a Rolls Royce, is the reaction from everyone else on the road.

It was an amazing feeling. Here is what is the difference, you don’t get the obnoxious looks and hand gestures similar matching the obnoxious flashy sports cars, you get genuine feelings of happiness, awe, and praise from other drivers on the road. It’s incredible. The feeling of being at a red light, people turning to you and being in awe of what you are driving, it’s like seeing a twinkle of their ambition looking at you, wanting to achieve greatness.

Editor’s note: I know I have been on that side before, wondering how I could be like that person driving that Rolls Royce.

We met up at another check point and were chauffeured back to The Joule Dallas. At this point it was rush hour traffic in Dallas, but I didn’t seem to mind, because I was toying with the backseat entertainment system. At that point, I felt like I was in a limo, doing business, writing, keeping track of the density of traffic and how long away we were from our arrival destination.

We got back, freshened up, and told Rolls Royce branding managers, representatives about our trips. When talking to other auto-journalists, they were mentioning the same thing that I was about the ride quality, sound system, general joy it was to drive and ride in the car.

We all headed down to the dinner where we were absolutely treated to a delicious dinner by Stephan Pyles, himself. The food was absolutely incredible and creative and we even got to meet Stephan there, at his own restaurant. Talk about an amazing experience in itself.

I was sitting beside one of the Rolls Royce representatives that deals a lot with the customization of the different vehicles. Diamond encrusted interiors, custom paint and leather work, gold accents and more. They love to give their customers exactly what they want and express options their customers never considered.

The night ended on penthouse of the Joule, looking over the city skyline as the Rolls Royces parked out front, lined up. The weather was perfect, sky was clear, and all I could think was how hard I need to work in the next year to be able to get one of these cars. 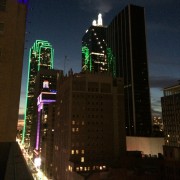 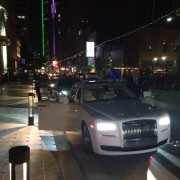 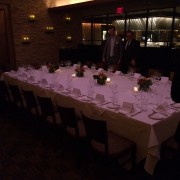 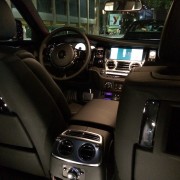 Wake up, driven in a limo to Fort Worth Texas Airport to depart to Toronto, back to the normality of it all. But, leaving with the exquisite and unforgettable feeling of a Rolls Royce experience.

Test driving the Rolls Royce Ghost Series II was an amazing experience. It’s like wearing a suit all your life and then someone suggesting you try a tailored suit that fits your perfectly. You will get a fire in your heart about owning one after you drive it. Your ambitions will flare, you will narrow your focus and you will try to make it a goal to drive, own and enjoy one. I can tell you as an entrepreneur myself, I expressed that. Now, this car isn’t for everyone. But for those who love Rolls Royce, will definitely enjoy this car. It’s not a Phantom, but it’s different, it’s great in it’s own right. It’s carved out a name that will proudly sit in the Rolls Royce line up for a very long time.

Thank you for reading,